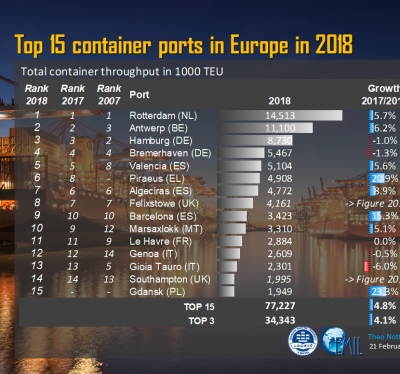 Last year, the top 15 ports recorded a growth of 4.8%, almost the same as the 4.6% growth in 2017. In 2015 the top 15 ports saw a small traffic decline of 1.6% compared to 2014. In 2016 they recorded a modest growth of 2.1%. The year 2018 brought a double digit growth in Gdansk, Piraeus and Barcelona, while Mediterranean transhipment hub Gioia Tauro saw a 6% decline in box volumes. German ports Hamburg and Bremerhaven recorded a small traffic loss, while container throughput in Le Havre and Genoa stagnated. Both Rotterdam and Antwerp stay on the growth path of the past years with a healthy throughput increase of 5.7% and 6.2% respectively. Valencia, the largest container port in the Mediterranean, can present a similar growth figure.

The top 15 ports combined saw a 26% increase in container traffic compared to pre-crisis year 2007. Only two of the 15 ports recorded container volumes in 2018 below the 2007 figures: transhipment hub Gioia Tauro and German mainport Hamburg (note that no 2018 figures are available yet for UK ports Felixstowe and Southampton). The performance of Hamburg – Europe’s third largest container port (-11.7% compared to 2007) – sharply deviates from the growth pattern observed in the two largest European ports which both managed to increase TEU volumes by some 35-36% in the period 2007-2018. The gap between Rotterdam and Antwerp now amounts to almost 3.5 million TEU, while Antwerp handles almost 2.5 million TEU more than Hamburg. Recent changes in the liner service schedules of alliances and the Elbe deepening and widening program should help the port of Hamburg to record a healthy growth in 2019. The top 3 ports in Europe handled more than 34 million TEU in 2018 (+4.1%) or 45% of the combined throughput of all top 15 ports.

The top 4 remained unchanged in 2018 featuring only ports of the so-called Hamburg-Le Havre range. However, Valencia, Piraeus and Algeciras are closing in fast on Bremerhaven. It is likely that a south European port will enter the top 4 in 2019 or 2020 at the latest. Piraeus continues to climb the rankings by gaining two places to occupy the 6th position in 2018. Piraeus was not even in the top 15 in 2007. Barcelona is now the 9th biggest container port in Europe, while two years ago the port was still at the 13th position. Finally, it is worth mentioning that the Moroccan transhipment port of Tanger Med handled 3.47 million TEU in 2018. With new container terminal capacity becoming operational, Tanger Med continues to be a major competitor for European hubs in the region around the Straits of Gibraltar, such as Algeciras, Valencia and Sines. 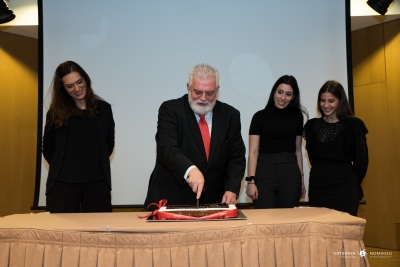 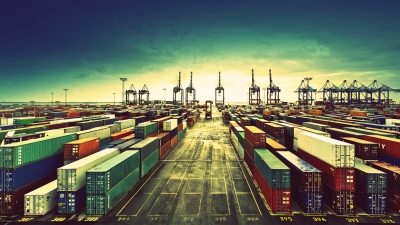 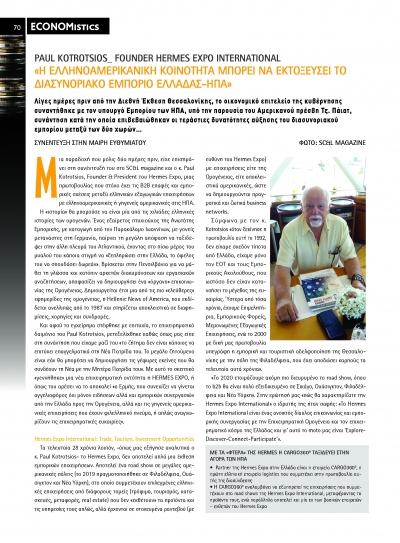 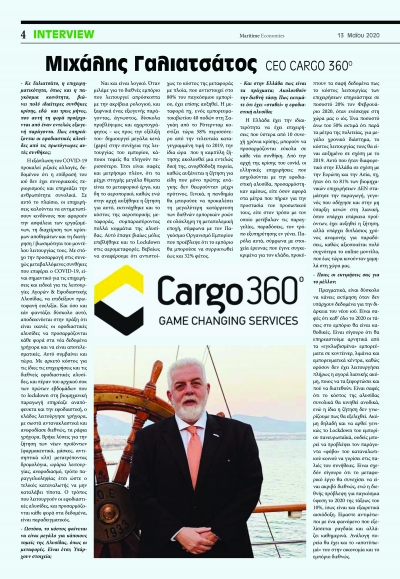